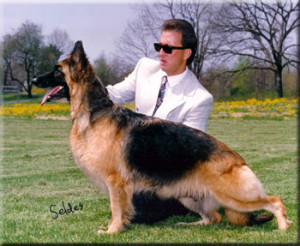 The TOTANA and PIPER HILL Kennels were merged in 1987, with the marriage of Barbara E. Woelfel (Piper Hill) and Frank A. Lopez (Totana). TOTANA commenced its shepherd activities in 1957, while PIPER HILL was founded in 1968.

In 1958, Frank imported Yasko V.Zenntal SchHIII who was awarded Winners Dog and Grand Victor at the National Specialty. Over the years more than 50 shepherds were imported from Germany by the TOTANA KENNELS. One of our imported bitches was eight times German Landesgruppen (Regional) Siegerin. We are proud to have owned a German Youth Siegerin and Youth Sieger and a number of other imports that have won Landesgruppen (Regional) German titles.

At PIPER HILL, Barbara distinguished her kennel with pivotal breedings that resulted in home-bred shepherds of soundness and structural correctness. She owned and produced a number of Champions both in conformation and obedience. Among those were Champion Piper Hill’s North Star, Champion Cobert’s Cardinal, Champion Hensan’s Doctor J of Piper Hill, Champion Hy Hopes Sundown of Piper Hill and Obedience Champion Cobert’s Ilona of Piper Hill UD SchHI. Ilona (“Jenny” as she was called) obtained a herding certificate at the age of 11 years. Jenny was the first dog of any breed to hold all these titles.

The 1987 consolidation of TOTANA PIPER HILL in Killingworth, Connecticut was significant in that it pooled resources and efforts. Within one year TPH won the United States National title with 1988 U.S. Grand Victor Champion Piper Hill’s Polo and in 1990 duplicated the feat with another Best of Breed and National title winner U.S. Grand Victrix Champion Amber’s Rosie of Bracewood. This tradition of excellence continues at TOTANA PIPER HILL.

The history of our kennel would not be complete without calling to memory our foundation male Piper Hill’s Polaris and daughter, Piper Hill’s Kodachrome. Polaris was the epitome of what everyone seeks in a dog…gentle with children and other animals with yet a confidence that would protect those he loved if needed. He was an AKC Champion of Record and worked as a search and rescue dog.

Kodachrome, or “Kodi” as she was called, was a black and red long-hair with perfect conformation and character. She achieved the Register of Merit title from the German Shepherd Dog Club of America and is a member of the “13-Club”, having lived past her 13th birthday. Kodi produced 5 AKC Champions in her lifetime including her son, Polo, who became one of the youngest Grand Victors ever to achieve the title. She died next to our bed but lives on in her many grandchildren.